In just a few short hours since its conclusion, the FoxNews Facebook debate has managed to spark some heated debate of its own. First, there were many who were shocked and dismayed to learn that the only way to watch the debates in real time was to have a cable subscription that included FoxNews Channel or C-Span.
Even listening to the debate was a challenge, as several stations that claimed they would run he full debate only ran the prime time debate. Stations like FoxNews Radio that did air the earlier "Happy Hour" Debate, ran it in brief and select clips couched by commentary. Alan Colmes, for example, gave the candidates the Mystery Science Theater treatment and offered sarcastic commentary, many times speaking over the candidates so that he would be heard.

Jessica Chasmar, of the Washington Times, said what we all were thinking: 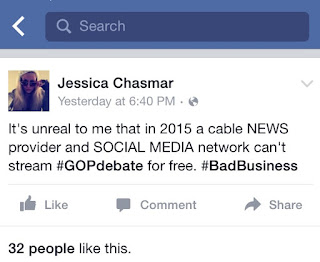 They also took some heat for the process by which they selected candidates. Publicly, they stated that they were using an average of five independent polls to make the selections. Those who watched both the Happy Hour and the Primetime debates saw with abundant clarity that some mistakes were made on that score. Carly Fiorina, for example, was declared by most to be the winner of the entire evening. Her answers were so complete and so concise that they were played in part during the Primetime event. And because of the way the events were broadcast, most Americans who were listening for free missed the vast majority of what she said.
The media's treatment of the happy hour debate made it clear that the intention was to marginalize those who hadn't made it into the top ten. Several media outlets referred to them as the "JV team," and even Planned Parenthood (whose recent scandal was the subject of a few questions) took to Twitter to call them "the kids table." 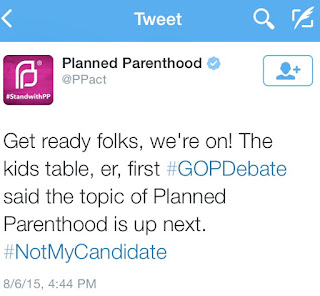 But despite the smaller audience and the clear attempts to make the "bottom 7" appear to be less viable, several of them managed to shine anyway. Carly Fiorina handled questions, attacks, and underhanded moderators with the skill of a seasoned professional. Indeed, after that debate, it was clear that her only weakness is a lack of political experience - and in the current climate, that may actually be more of a strength. Louisiana Governor Bobby Jindal was clear and concise in his answers, if a bit less polished than the others. And former Texas Governor Rick Perry stood out as both knowledgable on the issues and willing to crack a joke at his own expense. The fact that he has a very solid conservative record in the state of Texas - from defunding Planned Parenthood and creating jobs to deploying the National Guard at the border - doesn't hurt either.

As clearly as Barack Obama was mistaken when he called ISIS the "JV squad," the media was mistaken in relegating these three to "the kids table." But if they hadn't, and these three quite capable candidates had instead been the lower tier sharing the stage with Donald Trump, perhaps we wouldn't be talking about them today. The fact is, obvious attempts to marginalize them actually may have given them a better chance to stand out.

The primetime debate was not without its issues, however. Though it was much easier to find free streaming audio coverage at least, the overall assessment of the debate was that it was only slightly less orchestrated than a WWE tag team event. Several questions seemed specifically designed to get a rise out of Donald Trump, and it worked spectacularly. Governor Scott Walker was targeted with an abortion question nearly on par with something one might expect from Nancy Pelosi on the House floor: "You would let women diiiieee?" (To his credit, Governor Walker handled the question admirably.) Only once did the circus manage to break free of the tent, and that was during a heated exchange between New Jersey Governor Chris Christie and Kentucky Senator Rand Paul regarding the NSA. Even that exchange quickly devolved into a shouting match that left Christie evoking 9/11 and Paul shouting "Bill of Rights," bringing back memories of the Paulbot Mantra of his father's 2012 campaign: "Liberty! Constitution! I win!"

Although there were some standout answers, particularly from Senators Marco Rubio (FL) and Ted Cruz (TX), Governor Scott Walker (WI), and Dr. Ben Carson, the overall feel was that the debate was designed to be a circus that showcased Donald Trump as the blustering, abrasive clown. Unfortunately, setting the stage in that fashion may have damaged the credibility of the other candidates who participated. 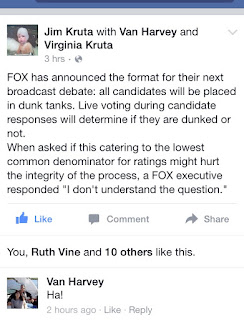 It's like the old adage: "Never mud-wrestle with a pig. You'll both get dirty, and the pig will like it."

Essentially, the moderators high-lighted Donald Trump as the predetermined mud-wrestling pig, and instead of allowing the other candidates to shine light on that by simply offering more competent comparisons, they built the Donald a mud pit and threw the first bucket of water.

Ginny Kruta
I am a full time student and mother of five. I spent ten years in the military and have lived in six states, but I have never lived more than 150 miles West of the Mississippi River. I am married to a baker - who also has one child - so our house is never quiet. I am studying political science and history at SIUE, and most of my friends think that the liberal university will succeed in its attempt to indoctrinate me. We'll see about that. I am shamelessly addicted to the following: Jesus, spearmint gum, painfully bad movies (think MST3K), reading, Psych (TV series), my kids, good food, and (last but never least) the one person who can always make me smile when I don't want to - Jim.